Although guitarist Barre Gambling and drummer Jesse Haff began jamming together in 1992 at the age of 14, it wasn't until 1999 that the two released an initial rough compilation of ideas as Daylight Dies in 'The Long Forgotten Demo.' A year later the two core members added a permanent vocalist in the form of Guthrie Iddings.

With a vocalist in place, the trio then proceeded to record a second demo in early 2000, 'Idle,' which further illustrated the band's musical and compositional growth. 'Idle' created such an impact locally that Tribunal Records picked up the demo and repackaged it. The demo was lauded for its attention to detail, melody and atmosphere. For many, it filled the gap no other stateside act thus far could achieve.

A year after the recording and release of 'Idle,' Egan O'Rourke was enlisted as the full-time bassist. As a quartet, the band quickly starting writing together and the first work to come out of the revamped line-up was a label-only two-song demo. The demo was shipped to various labels who had expressed interest early on. The strength of the music alone was enough to land Daylight Dies an offer from Relapse Records. In late 2001, Daylight Dies signed to the label. 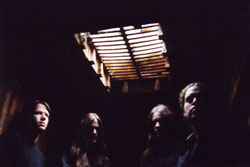 Once signed to Relapse, the quartet completed writing their debut full-length. Titled, 'No Reply,' the album contained nine songs which displayed a steady progression and far more encompassing than 'Idle.' 'No Reply' captured a somewhat doomier and varied sound, improving on the bands dark and catchy qualities. 'No Reply''s physical and emotional weight was greater than most anticipated from such a fledgling band and received many rave reviews. Terrorizer magazine called it "memorable and engaging", Outburn proclaimed it "pristine doom metal" and Digital Metal added "a combination of dark melody and deathly aggression."

Daylight Dies embarked on numerous tours in support of 'No Reply' upon its release. Touring Europe with Katatonia and the U.S. and Canada with Lacuna Coil - as well as numerous high profile festivals and one offs - the band proved they are an energetic live act and a force to be reckoned with in the international metal movement. 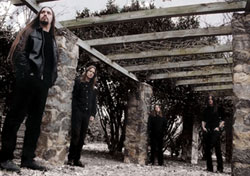 Following touring for 'No Reply', Daylight Dies replaced vocalist Guthrie Iddings with Nathan Ellis. Charley Shackelford also joined as a full-time second guitarist. Both earned the coveted positions on the strength of their abilities and impressive rehearsals with the band.

In August 2005 Daylight Dies entered the studio to record their second full length album, entitled 'Dismantling Devotion'. The material was mixed and mastered in Sweden by Jens Bogren at Fascination Street Studios and mastered by Thomas Eberger at The Cutting Room. 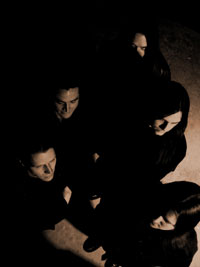 'Dismantling Devotion' saw the band charting significant new territory from previous output. O'Rourke contributed several segments of clean vocals and clean and heavy guitars often mixed for an extremely lush sound. The songs were as haunting, dark and dynamic the band had yet created.

Daylight Dies signed to Candlelight Records in November, 2005. 'Dismantling Devotion' was released in March of 2006 and the band filmed their first music video for the song 'Lies that Bind' in June. It was later accepted for airplay on MTV and VH1.

The band supported 'Dismantling Devotion' first as main support for Emperor during two capacity crowd reunion shows in New York City, and on a 11,000 mile North American tour with Katatonia and Moonspell in 2006.

The band returned to the studio in December 2007 to record their third full-length album, 'Lost to the Living'. Like 'Dismantling Devotion,' the album was mixed by Jens Bogren at Fascination Street Studios. 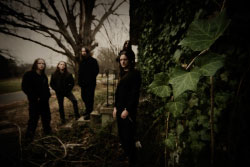 On 'Lost to the Living,' acoustic and clean guitars ride alongside heavy rhythms creating a multi-layered sound saturated in atmosphere and depth. Strings and woodwinds are also found on several tracks adding to a rich, organic character. Haff commented, "Lost to the Living is mix of beautiful melancholic leads and harsh dissonant rhythms; despair driven hooks and the overall dark atmosphere you've come to expect."

'Lost to the Living' was released by Candlelight Records on June 24th, 2008 and quickly garnered wide acclaim from critics who called it "an emotionally draining tour-de-force that commands unchallenged attention," (metalreview.com), "music to get lost in," (Pre-Fix Magazine), "astounding" (Aardschok), "contemplative yet vibrant with energy" (Exclaim Mag), and "masterful" (Revolver).

Following the tour, Gambling and Haff moved from North Carolina to Los Angeles and New York City, respectively. This move, as well changes in the lives of other members disrupted the way the band wrote and operated. While writing for the next album began almost immediately, it didn't begin in earnest until 2010. 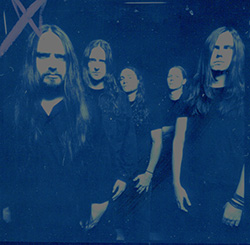 The band entered the studio to record their fourth full-length album, 'A Frail Becoming' in 2012. Once again, the album was mixed and mastered in Sweden by Jens Bogren at Fascination Street Studios. Yielding nearly fifty minutes of the band's tumultuous doom/death metal, as always flooded with as much emotion as aggression, 'A Frail Becoming' is the band’s most accomplished work to date. The album was mixed by Jens Bogren at Fascination Street Studios (Opeth, Katatonia, Devin Townsend), the packaging bearing photography from award-winning Jonathan Mehring in a layout designed by Agni Kaster.

A music video was recorded for the song 'Dreaming of Breathing'. The September, 2012 streaming of the new song 'Infidel' and the premiere of the video was the first new material the public had heard from Daylight Dies since 2008.

'A Frail Becoming' was released by Candlelight Records in October 2012, and has received an overwhelmingly positive reception from both the press and fans alike:

"At their best, Daylight Dies are all about contrasts. Mournful guitar melodies are countered by crushing fuerneal riffs, harsh vocal growls are juxtaposed with smooth, clean crooning. The way darkness and light play off each other on this album is quietly sublime..." - Decibel

"This is the album longtime Daylight Dies fans knew they were capable of writing. 4.5/5" - About.com

"The album just simply slays any way you slice it, but for death/doom fanatics, this may be 'Top Five of the Year' material. 4/5" - Metal Underground

"...the sharpness and force in the execution of what the band does is tremendous, I couldn’t have asked for a better release to kick off the autumn season with. 8.5/10" - Blistering

"While the Daylight Dies formula remains unmolested by time and passing trends, the production and musicianship have been infinitely refined... 9.75/10" - Metal Curse

"...hearing it once simply will not do, leaving you wanting another round of music-driven emotional abuse that will drive you crazy until that next dismal fix. 9.5/10" - Apoch's Metal Review

"We can only the band keeps delivering albums like these... 91/100" - Infernal Masquerade

"...a potent album that speaks to the best of what the band is capable of, and it’s flexible enough to pull in some new converts along the way. 4/5" - Metal Rules